This is a photo from the end of my driveway. A thunderstorm was brewing, and the evening breeze was cool. 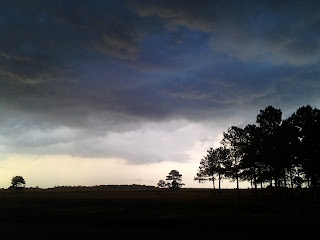 I'm home from Louisiana - for now. I hope I won't be called back, but will go if necessary.

I woke this morning, made some coffee, thought about breakfast, and made some S.O.S. For those that don't know what this is, it's browned pan sausage and cream gravy served on a biscuit.

We had a front overnight, so the temperature is in the fifties, and the clouds are still thick.

I plan on writing about my travels around where I was working in Louisiana. The surrounding area is interesting, full of history, and dynamics of commerce are well represented by what's there, what's gone, and what's just barely hanging on.
Posted by Jess at 7:38 AM 8 comments:

Way back when, the Allman Brothers came out with the "Brothers and Sisters" album. Tucked away in one of the corners was the following song. It never had the "hit" qualities, but sometimes people don't really understand there's magic in the dobro; gentle tones, rattling notes as the bottleneck coaxes the strings, and the lure of the South to pull you away.

I know this may be a surprise to many, but all the main-stream media reports, all they try to promote, and their opinion, is nothing but pure, unadulterated bullshit. Their perception, opinions, and observations are founded upon an unrealistic view of reality, which most would consider insanity.
Posted by Jess at 6:37 PM 5 comments:

Some Thoughts for Today

I'll start with Bill O'Reilly. While he may have been what is not considered politically correct, I doubt he's of the same caliber as Bill Clinton, who is known for being a philanderer and a rapist. While bots caused the destruction of his career - thanks to the ass-clowns now running Fox - they ignore the Clintons, and their reprehensible actions. O'Reilly got a raw deal, and Fox is filled with pinheads.

I know it's what the news organizations want to report, but to seriously consider the efforts of North Korea as dangerous is ludicrous. They don't have the technology to start a world war. Even if they did, China would stomp on them like a bug, if they caused too much trouble with their biggest customers.

The Supreme Court has a new member, which is forecast to be good. I'll sit and let my feet hang down on this one. The Republicans are batting zero on their last few picks, and the country suffered because of the dumbassery.

Aaron Hernandez was found hanged in his prison cell. While many suspect foul play, it really doesn't matter now. He was a bad man, and they won't have to pay for his room and board any longer.

I'm not happy with the lack of concern on what I have to pay for health insurance. That, and the obvious lack of interest in cutting the government to the bone, and allowing taxpayers to keep more of their money. Could this be politics, and bureaucracy? Of course; they're like the worst of parasites. Even ticks find them deplorable.

That's all for now, except for my opinion of the Mississippi river: It's amazing to behold, and even with the levees controlling the water, the sediment from the floods of the past left soil almost unbelievably rich. The soil is almost black, and the fauna is lush.

Where Life Brings You

I haven't been writing much, but it's not because I don't want to; it's because time dictates other activities.

I've been remodeling a house, which is daunting at best. My wife (new wife and more than special) worked for nine months to reach the point of moving in; and still have much to do.

Meanwhile, while this is going on, I've been sent to Louisiana for a project that is expected to last about 4 weeks. It's a bad time for this, but it's one of those things that don't require my vote, and a little above my pay grade.

Anyway, my expectations are shattered. All the advice, warnings, and opinions don't match my own, and it's been a good experience.

Where am I? Working in an industrial facility in St. James, Louisiana. It's on the Mississippi, on thewest side, about halfway between New Orleans, and Baton Rouge. For those that never visited, I'll explain below about the location.

St. James is on what's known as the "River Road". Louisiana 18 follows the Mississippi, and can best be described as winding, rural, and beautiful. While it's accessible from many faster, modern highways, the actual highway has a lower speed limit, a huge levee on the East side, and the levee is manicured by short well trimmed grass. Only a few bridges allow access across the Mississippi. The bridge I use is called the Sunshine Bridge, which is on LA - 70, and allows access to the industrial facilities that are on LA-18.

The people here are the salt of the Earth. Polite, kind, helpful, and far from the cold-hearted denizens of large cities. To me, that's the sign of a healthy society. Those that live here understand acts of kindness, and the cultivation of integrity, have more value than all the wealth in the world. It's refreshing, and I feel privileged to share their world.

So, I'll be here, until finished, which I hope is sooner than anticipated. I like it here, but it's not home; and home is where my heart is. I have a wife that I wished I'd met 40 years ago, and she's filled a huge hole in my life.
Posted by Jess at 4:35 PM 4 comments:

Using a search engine, and typing in "pension plan crises", will reveal more information than you'll have time to read. Considering the magnitude of the budget shortfalls of pensions, you'd think there would be a strong effort to fix the problem.

From what I've read, many pension plans are basically bankrupt. More goes out than goes in, less contribute to the plan, and the brewing disaster is already affecting the credit ratings of some states.

There are only two ways to fix the problem:

- Find the revenue to make up the shortfall.
- Reduce pension payouts.

Regardless of which method is used, it seems too many are just taking the ostrich approach, but waiting only leads to major problems. If bankruptcy is the final outcome, the "plan", which is the agreed reduction in liabilities by creditors - may lead to pennies on the dollar. To someone already retired, pennies on the dollar of their planned income is a disaster. For taxpayers that may have to make up the shortfall of public pensions, the increase in taxes to pay for foolishness is unconscionable.
Posted by Jess at 6:45 AM 2 comments:

Steve Bannon is now not a member of the National Security Council. While the press scrambles for information, and will probably make up some news in the process, Bannon released a statement informing the media his job cleaning up the mess Susan Rice made was complete.

While many won't believe his statement, his original purpose he described makes sense. When you add the fact Trump is someone that completes tasks, and needed someone he could trust, while Flynn was being replaced, it makes sense for Bannon to step down. If he still has a value to the administration, you'll see him in another position. If not, he'll go on with his successful life.
Posted by Jess at 3:07 PM No comments:

In a Less Polite Society...

...Susan Rice would be waterboarded, and then thrown under the jail for betraying her country. That would only be fair, and then they would have the names of the rest of the traitors.

May they all be found, tried, and any responsible for the deaths of U.S. citizens be executed.
Posted by Jess at 2:54 PM 4 comments: