A Newspaper Story on a Hot Summer Morning

It was a tough month. My mother had a T.I.A. and I was still shifting through legal documents, shuffling temporary care and wondering where it would all lead. There is no preparation for such things, unless a close family member with experience is available for reference. I didn’t have this, so I was fumbling through the entire mess.

Work was an added burden. I returned a few days after my mother was home, but I was still on edge with the details. I spent too much of each day with thoughts of how overwhelmed I was. All I could do was plod on and work with what was available.

I arrived to work one morning to catch up on things and spend a few minutes reading the news. During this process, a local article caught my eye: “Local Firefighter Missing”.  I examined the article and found my brother’s name.

I spent a few moments determining it was spelled correctly and then dialed his cell phone. After a few rings, I reached his voice mail. I dialed his home, which led to his answering machine. A call to his wife ended with the same results. I told the secretary I was leaving, with a brief explanation. I was at my mother’s house within a half hour.

I called my wife, who was with family at the beach. She had heard, but was too upset to call immediately. Her family tried to find more information but was unsuccessful. We spoke for a few moments. I told her I would keep in touch.

I finally was given the cell phone of the local fire official that was heading up the search for my brother. He explained my brother was in the process of finding a lost radio controlled airplane for a friend the evening before and never returned from the marsh where it crashed.   They had searched all night, but were unsuccessful. I couldn’t do anything, so I called my older brother to tell him what was happening.

We talked for a few minutes. We were both a little surprised on the term “firefighter” as a description of my brother. He was between jobs, but he’d been in industrial maintenance and marine electronics his entire career, except for his time in the Coast Guard. We both knew he was a volunteer fireman for a rural community, but as time went on, we found it was much more than a part time job.

I ended my call with my brother with the promise to keep him informed. As I was collecting my thoughts, my wife's niece called to offer her sympathy for my loss. I could only say: “I guess they found him and he’s dead.” She apologized for breaking the news. She thought I knew already, since the news reported a Coast Guard helicopter found the body.

Unless you’ve had this happen, there’s no way I can explain what goes through your mind at a moment like this. Hope fades like a winter sunset and the cold logical knowledge you can never speak again to someone you love becomes a harsh reality.

I spent a few moments composing my thoughts and called my wife. She could hardly speak. She knew before I did and was overwhelmed with grief. She wanted to call, but couldn’t. I understood; we’d been through a lot and this was a shock to both of us.

After a few more minutes, I called my brother. I think he, like me, might have suspected the worse and we made plans on when he would arrive. We agreed to not tell my mother until he arrived. She was still recovering and her mind wasn’t as clear as it needed to be.

I made more phone calls to family. I really don’t remember who, or the details. My mind was absorbed with other things. I dreaded telling my mother; she’d buried another son only three years before.

Eventually my brother arrived. My mother was surprised by his appearance, which led to me telling her my brother was gone. She asked the details. I explained, although I knew she didn’t really understand. She was having a hard time just functioning. My niece, who was staying during the day, hugged her and held her for a few minutes. I wandered the house wondering about life and how it takes unexpected, and unwelcome, paths.

Over the next few hours, more information became available. I eventually spoke with my sister-in-law. Her grief only added to my own. She had spent the entire night with the search party and was a wreck. I could only offer my help, which meant very little at the time.

Family arrived to help and console. Eventually, my sister-in-law arrived from Florida with my nephew and his fiancé. They would stay at my mother’s. Her daughter would stay with friends. Her children were too much for my mother, although I don’t think anyone, except me, realized how much it did. She was as fragile as a human can be and the young children were too overwhelming.

The next few days passed in a fog. I know there were many visitors, food from neighbors and the general feeling of helplessness while a funeral is planned. The viewing was set for Friday and the ceremony would follow on Saturday.

The viewing opened my eyes. I knew my brother was a volunteer fireman and was working on his second level of E.M.T. certification. I had no idea how much he contributed and had made a mark on his colleagues. They loved and respected him as much as I did. I was overwhelmed and proud, although I felt as though I was discovering facts about a stranger.

The funeral was a ceremony only. My brother would eventually be buried in the Veteran’s Cemetery in Houston. I didn't go to the burial. My mother couldn’t go, so I stayed to insure she would be okay.

During the ceremony, Boy Scouts honored my brother with a song. I knew he had been involved with his son, but I didn’t know how much. People spoke with fondness about knowing my brother. Friends I hadn’t seen in years stopped to offer their sympathy. My sister-in-law spent a long time detailing my brother’s successes in life, including his time in the Coast Guard, his pilot’s license, time in the Boy Scouts and many other things that most people never knew. It seemed to drag on, but I knew this was the last time she would ever see him- even in death - and I understood how she was grappling with the loss. It was too sudden; she was so fragile.

Eventually, the firemen held a short ceremony that I can only remember as “Last Call”. The chief called the dispatcher with words that they were signing off. The dispatcher responded and I broke down. He was gone. Only memories remained and they deepened the sadness.

As I left the funeral home, I looked towards the fire trucks that filled the parking lot of the funeral home. Every local city was represented. I had no idea how many lives my brother had touched, but there were many and the respect was obvious. The setting sun held the trucks in silhouette, which was fitting. A life was over, so was the day.

I've spent many a moment wondering what happened. My brother was in exceptional physical shape, knew the dangers of hyperthermia and was trained as a first responder. He was found with an empty bottle of water at his side. The autopsy only revealed “Death by Environmental Exposure”, which indicated the horrible heat on that day claimed him before he realized it was too late.

It was typical for my brother to help others, which led to looking for the lost radio controlled airplane of a friend. This action was similar to his pursuit of E.M.T. certification and the stories about saving lives and fighting fires. I never knew, but I do now. I can only honor him with a few short paragraphs. It seems insignificant when compared to his life. I miss him and will grieve for a long, long time. 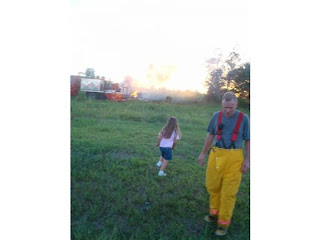 Email ThisBlogThis!Share to TwitterShare to FacebookShare to Pinterest
Labels: Family, The Past