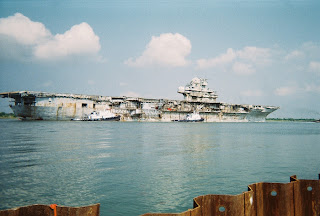 A friend's father landed a jet on this carrier back in the early sixties. This is probably one of the last photos of the Oriskany as it was towed to final preparation before being turned into an artificial reef. Much of the ship had been removed, but it was still a magnificent sight as it passed our project location a few years ago.

* I have to add how big it was. what's most amazing is that one of the reasons for decommisioning was it wasn't big enough for modern requirements.
Posted by Jess at 5:54 AM